Developmental delay (aka delayed milestone) is where a child doesn't reach 1 of the milestone stages at the expected age, which can be in one of the 4 developmental domains:

However, a wide variety of ages can be considered normal, and not a cause for medical concern. Milestones are often measured using percentiles, and milestones between the 5th and 95th percentile don't require intervention, but values towards the edges of that range can be associated with other medical conditions. It is not possible to treat.

What is developmental delay, and GDD?
It's where there are delayed milestone in 1 of the 4 domains, so that's gross motor, fine motor, language, and social. People have also come up with extra ones, but these are the biggies. GDD is where there is delay in 2 or more of these 4 domains.

Wait. You said language and social, aren't these 2 things basically autism?
It is, but the diagnosis of autism requires that it's not better accounted for by GDD

Developmental milestones are recognized norms of pattern of development that children are expected to follow. In premature infants (<37 weeks gestation), we use corrected gestational age until 2yo.

The 7 developmental domains include:

A mnemonic that can be used to memorize is at 1yo, single words. At 2yo, and parallel play (2 things). At 4yo, counts 4 objects.

Gross motor. What's that, and how does that change over time?
So that's large movements bub makes with their arms, legs, feet, or whole body. So we start with the major land mark, whcih is 12mo, which involves walking with support. Working backwards, at 9mo, they pull to stand. At 6mo, sit put weight on hands, which can be memorized because "sit" sounds like "six", as well as 6 looking like someone sitting. At 4mo, start rolling. At mo, extend their arms forward. We can memorize this with the mnemonic that myelination of nerves happens from head to toe during the 1st year of life, which is why things start with head support, rolling using arms, sitting using waist, and crawling using knees, and so forth. Going the other way, at 15mo, walks without support. At 18mo, climb steps with support. At 2yo, run, and climb steps at 2yo, memorized by 2 steps at 2yo. At 3yo, tricycle, which can be memorized by 3 wheels at 3yo. At 4yo, hop, which can be memorized by a kid with their knees bent like a "4" (to hop), and playing "hop 4". At 5yo, skip, that can be memorized by the fact "5" looks like "S". At 6yo, ride a bike.

Fine motor. What about that?
So that's using the smaller muscles of the hands, fingers, and of course the eyes. So we start with the major land mark at 12mo, which is the pincer grasp and throwing. So working back, at 9mo, there's the whole-hand grasp. At 6mo, there's ulnar grasp, where you grab without using the thumb. At 4mo, reaching, and pulling objects to mouth. At 2mo, pulling at clothes. Going the other way, at 15mo, they can draw a line. At 18mo, they can scribble. At 2yo, they undress. At 3yo, they can copy a circle. At 4yo, they can copy a cross. At 5yo, they can copy a square, write their name, and tie shoelaces. At 6yo, they can copy a triangle. The shapes can be memorized from 3-6, involving a stick figure with a circle face at the top, a cross hanging on the neck, a square body, and a triangle skirt.

lol?
Well eventually they can, right

? Remember that it also includes listening too

Social. Is that how bubbly they are

Wait. Why are you doing this up to 6 months? You being a bit lazy

?
It's why we do it. We do it because under the age of 6, they bub can't readily express themselves, so we use this to find out what's going on with them. Also, they start going to school, so things become more obvious when they're around others all day. 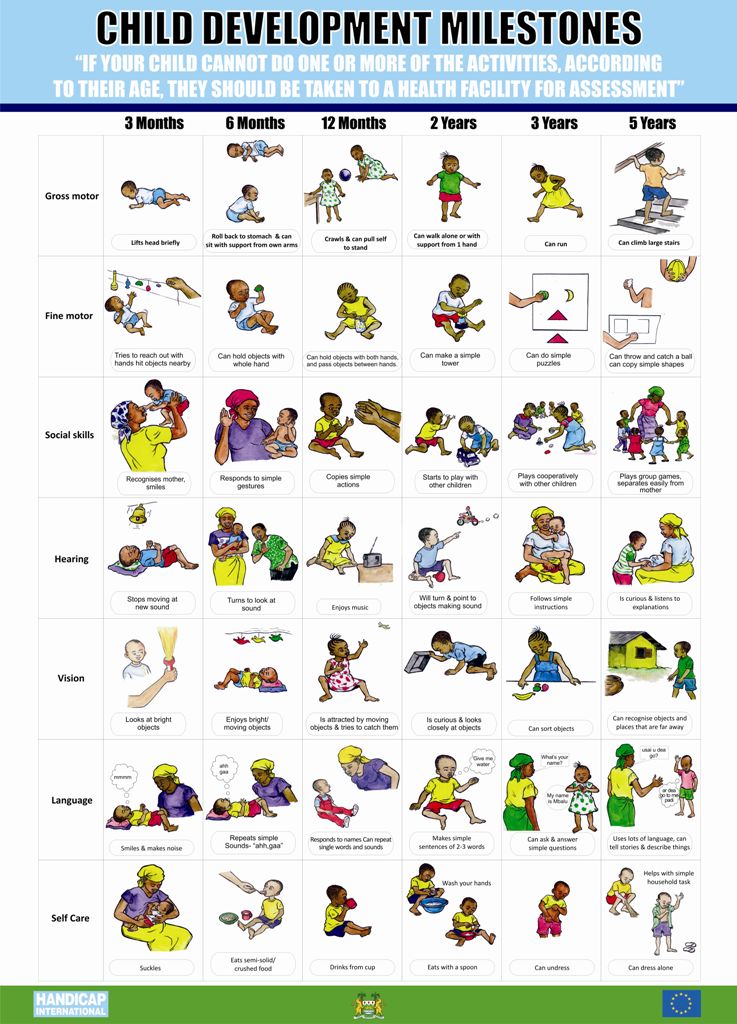 ?
Once you've remembered it based on each of the 4 domains, you can then remember it based on the other dimension, which is age, so at 1, 6, and 9 months. Also 1, 2, 3 and 4 years. Keep those landmarks in mind. The most important is 1 year old.

What happens at 1 year old?
They can walk alone. Use 2 fingers in a pincer grip. Say mama and dada. And imitate a parent. That's where we want them to be

Let's go down to the short end. 1 month. What do we expect?
Not a lot, obviously

. Lift their head. Track things with their eye. Coo. And recognize their parents.

How about between 6 and 12 months?
Again, it's the stuff in between. So in between sitting up and walking, is walking with assistance. In between raking grasp and a 2 finger prince grip, is a 3 finger pincer grip. Language we sort of ignore here. And in between stranger anxiety and imitating their parent, is interacting with parents, such as waving bye-bye or play "pat-a-cake" with parents.

That sub-division type strategy made memorizing a lot more easier

. But how about as you go up to 2 years of age?
It's easy because it correlates with the age. Climb 2 steps. Say 2 word phrases. Follow 2 step commands. And the only exception - stack 6 blocks.

So 3 years would be the year of 3's?
Yep! Ride a tricycle. Say 3 word sentences. Copy a circle, which can be memorized with the fact that it is a 360 degree angle! For fine motor, they should be able to draw a person with as many parts as their age - for example, a face, eyes, and mouth. And, they can brush their teeth.

So a 4 year old can add a nose to their picture?
Yep. Also, they can hop. Copy across. And play with other kids.