Pap smear (short for Papanicolaou, also known as Cervical smear) is the screening for potentially pre-cancerous and cancerous processes in the cervix (i.e. opening of the uterus or womb), i.e. cervical cancer. As a screen, unusual findings are followed by more specific Dx, and if warranted, intervention to prevent progression to cervical cancer. Examples of a pap test include ThinPrep Pap Test. 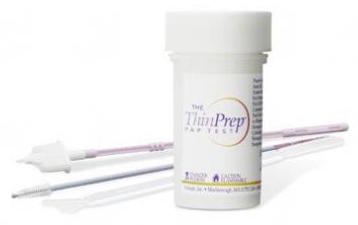 What is a pap smear?
It is used to check for a possibility of cervical cancer.

Wait... what is the cervix?
It is the opening to the uterus (which is also known as the womb).

What do you mean by a "screening test"?
It means if it comes back negative, you most probably don't have it. But if it comes back positive... you need to do more tests, to confirm whether you have it or not!

So if it comes back positive

does that mean I have cancer :'(??!
No. We are only testing for abnormal cells on the pap smear. It increases the likelihood of cancer, but it isn't cancer. Even HSIL/CIN 3 is still only considered "carcinoma in situ", a "pre-cancer". So it's not cancer

HPV DNA testing is a screen for the virus causing abnormal cells on the cervix, and can be done alongside the pap test.

Sorry, what was HPV again

?
It's the virus that is implicated in 70% of cervical cancers.

Who gets papsmears? Do men do them?
No

So if you're not sexually active, you don't need to do them?
Yeaaap

A "complete hysterectomy" is where the uterus is removed with the cervix, right? Well, if you do that, do you still need the papsmear given you don't have a cervix anymore??!
It depends. In practice, most women continue to have papsmears, and they should particularly if they are at high risk, such as having had the hysterectomy done for a cancerous condition. But if they're not high risk, they don't have to.

So what does the pap smear involve?
A swab is inserted into the vagina, twisted around the walls of walls, to get a sample of cells on to the swab. That swab is then tested.
Side effects
Follow up

OK, papsmear has been done. it's come back "low grade abnormal". What to do?
First of all, understand that what's come back positive is not a "cancer". It's a viral infection that's been detected. Now because it's "low grade", most likely it will clear within 1-2 years, so we just leave it.

How about if it's "high grade"? Or... the same case from before, but now I've done a repeat papsmear, and it's come back positive... again

?!
You will be referred for colposcopy.

OK, "abnormal areas detected". What next

?
We loop it and take that biopsied loop. We can also freeze it, but that destroys the sample, so we prefer to loop it. If it's severe, we want to take it out PLUS a margin around it, done so in the form of a cone-shaped wedge, which is called a "cone biopsy".

That "looping" sounds a bit like a good ole Western... yeeeehah

! Where we loop it and yank the ole fella out!
True indeed.

Does the colposcopy have any side effects?
It's not uncommon to feel discomfort for a short time. You might also get some "spotting" of blood aftewards.

Now that I've been treated, anything else I need to know?
Screening now changes for you. We repeat a papsmear in 6 months, and from 12 months both the papsmear and HPV DNA test, and if they are negative for 2 years in a row, you return back to the normal schedule of screening every 3 years.